I pity the poor criminal who tries  to make a run for it from this Detective Sergeant.
The referee was off duty on Saturday, but the fitness he undoubtedly needs in his job as a copper meant he had the game by the collar, using the positions he was able to get into to make decisions from a perfect spot 10-15 metres away for the whole match. 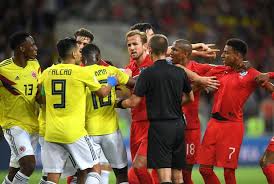 Referees looking to get themselves climbing the promotion ladder should have been watching this game (although admittedly an arctic blast chilled the bones of this Assessor on Saturday afternoon).


As a referee, I was, in my early years, seriously unfit and unqualified to referee at a serious level. Later, as I lost weight and worked on my fitness, a whole new game opened up for me, one which makes refereeing many times easier.
Assessing - or Observing - players over the last two seasons, I have been distressed to find myself, week after week, having to point out to aspiring refs that they are not getting into the right position to make credible decisions.
What I'm seeing are refs running from box to box in a straight line, a habit that means they are often either getting in the way of play and players or too far away when the ball is moved wide on the left or right towards the goal.
It's not really complicated for referees, but it does demand a basic degree off fitness and anticipation that turns a mediocre match official into a half-decent one.
Let's start by looking at goal kicks, both the place kick and the drop out. The referee's aim must be to get him or herself into the position where the ball is dropping and where attacker and defender are challenging. With a drop kick, this can be tricky and the referee needs to be fast off the mark, running hard for the first 30 yards and then turning to run backwards as the goalkeeper takes the kick. The ref should try their hardest to get as close to the drop zone, out near the touchline so that you are looking through the action to your assistant on the other side of the pitch.
The place kick gives the ref more time and if the game is of a decent standard the ball will be kicked the same distance each time, showing the ref exactly where he needs to be standing.
Equally, a variation on the old-fashioned diagonal is just as important as keeping up with play. The strict diagonal - corner of one penalty box to corner of the other penalty box - has fallen out of fashion, to be replaced with the more sophisticated styles that are only a little different.  I find myself having to persuade junior referees to start off with a diagonal as week after week I see 90 minutes of running in a straight line through the centre circle, which gives a ref a very poor view of crucial incidents.
Getting yourself wide on the left or right gives the referee an excellent chance to follow attacking play as it moves towards the penalty area. This is the time when the most important decisions have to be taken - penalty shouts, disputed goals, fouls - and where your decision making will be closely scrutinised.
The referee who is running 15 yards or so behind the action, with no-one blocking his view, stands a much better chance of making the correct decision. But standing on the edge of the centre circle looking out to the left hand side of the pitch through a crowd of midfielders is going to have little credibility when the player with the ball suddenly goes to ground. Foul or simulation? Are you in the best position.
So this is why a basic standard of fitness is crucial to making good decisions. If you don't have this fitness, your decisions will come under close scrutiny and you'll find dissent levels rising. If the attacker who dived looks up to find you breathing down his neck, there won't be too many protests.
This is a basic level of refereeing that needs to be mastered early on. Once sorted out, you can start developing seriously.
at 6:19 pm 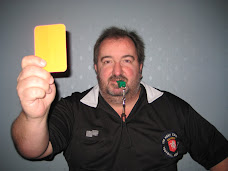